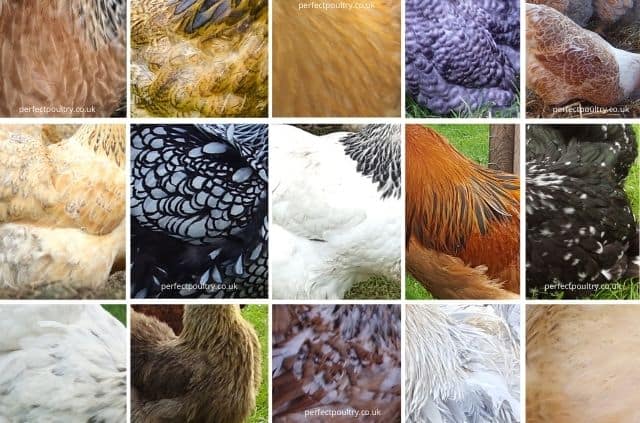 I thought I would explain and illustrate the different types of feather markings. This is useful if you are new to keeping or exhibiting poultry. I also explain about some of the breeds and varieties that are associated with the markings.

It is very simple to state that a Plymouth Rock is barred in colour without explaining about that bar. Their barring is made by the feather having alternate bands of black and white across their feathering. These bands are to be of equal widths.

The breed of Campine also has barred feathering. Here the bars are required that the black one is three times the width of the other colour. In a gold Campine would obviously be gold, whilst in a silver version it would be pure white.

A more indistinct type of barring occurs in breeds that have a cuckoo colouring. Here the bars are not so clearly defined. They are usually described as being a dark blue or grey bar, shading into a paler shade of slate coloured ground colour. The Marans is described as being a bluish grey ground colour with a black bar to it. However, these bars are not very distinct and usually of a dull coloured black.

The term Spangling can cover different types of the same feature. In the case of a Hamburgh the markings at the end of its feathers take the form of quite a large round black spot on to the birds ground colour which can be either gold or silver.

In the breed of Ancona the tip at the feathers end should be in the shape of a ‘V’. It is pure white in colour with the feathers background being a beetle green sheen of black.

Mottling is another expression for a variety that has a different colouring to the end of its feathers. The markings here are not as clearly defined and their shape can vary. They should be evenly distributed over the birds body. In the breed of Leghorn this colouring is described as being in the form of a large blob as distinct to ‘V’ ticking. The breeds colour is classified as being an Exchequer and again the marking is white on to a black background.

One of the most common form of feather marking is the laced and there are several different types. Firstly there is the straightforward single lacing that is in the form of a different coloured outer edging to the feather. This lacing should be of an even width all around the feathers circumference. The width of this lacing can vary between the breeds. An example being in the Sebright bantam. This should be as fine as possible whilst still retaining a solid black appearance.

The next variation is the double lacing, where the feather still retains an outer lacing but also has an inner one closer to the feathers shaft. This second marking should maintain the shape of the outer one but obviously smaller in size.

This type of marking is associated with breeds such as the Indian Game or Cornish as most other countries call it. Also the Dutch breed of Barnevelder has both single and double lacing.

A variation on this double lacing is in the varieties that have a feather marking described as being pencilled. In this marking the perimeter of the feather is the same colour as the birds body colour. The feather then has three or more black markings. As in the laced they should be the same shape as the feather itself. But as they move nearer to the shaft of the feather they grow smaller in size.

These black markings should be fine in width but distinct in colour and in many breeds extend to virtually all parts of the body. This type of marking can also be called partridge as it is in the Wyandotte when in a gold version. Whilst it reverts to being called silver pencilled with a change of colour. It can be confusing and I have no explanation as to why it has become normal definition.

The breed of Hamburgh can also cause unexplained confusion. This breed has a colour referred to as being pencilled but in actual fact it is not like the pencilled Wyandotte. This has a series of very fine straight bars across the feather as in the Barred Rock. These bars are of equal width but are narrow in width and extend as low down the feather as possible.

My final piece of clarification centres on the markings called columbian and breeds such as the Brahma have this colouring. This consists of a black stripe down the middle of their hackle feathers, whilst still retaining a pure silver white outer edging.

In the male birds their saddle hackle feathers can also be similarly marked. The under-colour on both sexes can carry a slate colouring to it, providing it does not show in the top colouring.

In the breed of Wyandotte this colour is described as being the columbian, but confusingly in the Brahma it is called ‘Light’.

This would not be so misleading if it was not for the breed of Sussex. This also has a colour also described as being a Light. However, in Sussex any sign of colour in the birds under feathering is absolutely taboo, except in breeding stock.

Their hackle markings are the same as the Brahma, but they are not allowed any sign of colouring to their saddle hackle feathers. This is yet another example of a lack in communication between the various clubs when the standards were being created.

There can also be a slight variation with the names used on the European continent.

This summary of descriptions covers most of the possibly confusing variations within the breeds of Poultry. If a breed is standardised in a self colour then apart from distinguishing the correct shade then the rest should be straight forward.

Finally, may I clarify that in many cases the feather description is for the female of the breed and usually the breast on the male bird. His shiny top feathers taking a more self colouring or possibly striping, as in the laced Wyandotte.